a game of wiffley, anyone?

A few years ago in our neighborhood in Vermont, I promised to plan a giant wiffleball game on a weekend in the summer.  I’m fairly certain most of my neighbors thought I was off my rocker.  No respectable adult spends a sunny summer afternoon throwing a plastic ball around and trying to hit it with a skinny yellow bat.  Luckily most of my friends are only minimally respectable adults.

That’s why, on a sunny day a couple of summers ago we had our first big wiffleball game.  Let’s just say that any minor skepticism about this seemed to melt away as we started pummeling that little white ball around and running the bases.  At one point, most of the kids had left the game to play on the jungle gym at the school field while the adults kept at it.  Was it fun?  A friend of mine pulled a massive muscle in her leg diving into second base and everyone from opposing teams started to trash talk each other on the field.  Oh yeah, it was fun.

The wiffleball tradition in our neighborhood in Vermont lives on, but we decided to take on an even bigger challenge – to bring wiffleball to France.  Once we knew we were moving, one of the first things in the shipping container was  a load of wiffleballs and some bats.  It took us a while to find a place to have the game, since most of the big spaces in France are filled up with things like chateaus, fountains and reflecting pools.

Finally, after a long search, we finally found the perfect site for a game and I sent out an email to all of our friends to see if they would like to meet up on the Monday after Easter for a game and a picnic.  Not a single person had ever heard of the game wiffleball and despite that, I had a huge response from the email.  Even more shocking was that not one person seemed to think I was off my rocker.   At least they didn’t mentioned it directly to my face.

The day of the game, the weather was rubbish.  It wasn’t rainy, but it was overcast, chilly and very windy.  My first thought was to postpone the game since wiffleball is best played on a sunny, warmish day but when I called my friend to gauge her opinion she said, “CANCEL THE GAME?!? You can’t cancel the game!  Everyone is coming and I even made a cake!”  These new friends of mine are even more hardcore than me.

After everyone showed up at the field, we made an attempt to explain the game, which it turns out is similar to a game played in the UK called rounders.  Similar but not the same.  We decided that we should just start to play and work throughout the details as they came up.

What happened next was sheer chaos.  People were running with the bats in hand, they weren’t touching the bases and sometimes they were passing each other or doubling up on the bases.  It was like a mix of every bat and ball sport you’ve ever seen, with a little bit of Philadelphia Kickball thrown in.  Soon everybody was saying that they really loved playing “wiffley,” which meant that, in addition to a set of new rules, the game also got a new name.  And it was fun.  Really fun.

Luckily there were no pulled muscles, but there was an enormous amount of trash talking, which in my opinion, is the indicator of a great day out at the ballpark.

When is the last time you played wiffleball?  You might want to give it another chance.  I can assure you, you won’t be disappointed.

Some of you may be interested to know that the tradition of playing marbles at recess is still alive and well in France. 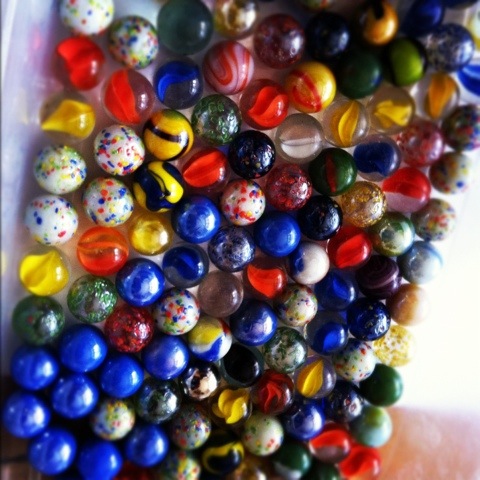